Prior to getting started with the service, it is important to understand a few points. 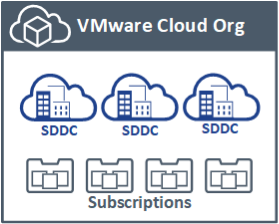 In addition to containing SDDCs, an Org will also contain any host subscriptions which might have been created. These subscriptions are fixed on the following attributes:

A major benefit of VMC on AWS is its ability to provide high-speed, direct access to AWS services. That said, it is required that all customers maintain a dedicated AWS account which will be used to access and manage these services. If you are unsure of how to create an AWS account, then please refer to the AWS documentation for more information on the process.

Please refer to the roadmap for a list of AWS regions which offer VMC on AWS.

Since VMware Cloud on AWS is a managed service, full admin-level access to the SDDC is not permitted. This restriction is in place to prevent customers from modifying the infrastructure of the SDDC. Instead, customers are given a role that allows them to fully manage workloads which they have deployed within the SDDC. Normally, this permissions model does not impact day-to-day use of the service; however, it’s important to keep in mind if you are planning on integrating tools directly with infrastructure components such as vCenter. If the integration you are planning requires admin rights, then it may not function properly. It is recommended to review the documentation for your specific application in order to understand its permission and access requirements.

Key Takeaways of an SDDC:

Each SDDC is provided direct access to AWS services via a connection to a customer-owned AWS account. This connection is established as part of the SDDC provisioning process and is performed using one of two methods:

The term “connected” simply means that the customer has granted permissions for the VMware to enable routing between an SDDC and a VPC within the customer-owned AWS account. These permissions are granted via IAM roles which are created within the connected account using a CloudFormation template. It is important to note that the person who is performing the account connection process must have sufficient permissions (e.g. admin rights) within the AWS account in order to execute this CloudFormation template.

Once a connection is established to the AWS account, it then becomes possible to configure a cross-link between an SDDC and a VPC within that account. The cross-link itself is made up of a series of cross-account ENIs which are attached to a subnet within the VPC. It is these ENIs that provide the hosts of an SDDC with a network forwarding path to resources within the VPC.

The cross-linking process is automated at the time of SDDC deployment. No manual work is required to perform this configuration.

In the majority of setups, customers wish to maintain some permanent means of direct connectivity between the SDDC and their on-premises environment. IPSec VPN is a common means of accomplishing this. IPSec VPN provides secure connectivity to the private IP address ranges of the SDDC and is implemented with a tunnel to the edge router.

In cases where neither IPSec VPN nor Direct Connect are available, the vCenter server appliance within the SDDC may be accessed directly via its public IP address. Per the default firewall policy of the SDDC, vCenter will not be accessible unless connectivity is explicitly permitted.

All SDDCs will be cross-linked to a VPC within the customer-owned AWS account but may also be connected to other networks (such as an on-premises environment). In order to ensure that the SDDC can communicate with other interconnect networks, it is vital that IP addressing be properly planned. IP ranges should be unique and non-overlapping between the SDDC and any networks to which it will be connected. As such, one of the most critical pieces of the design process is proper planning of IP address usage.

Though it is not required, it is a good practice to allocate IP address space in large contiguous chunks. The following table provides a sample IP Administration plan.

Customers will generally populate an SDDC with workloads in one of two ways:

A greenfield deployment operates on the notion that the SDDC is a completely new environment. In this scenario, all workloads will be created from scratch and the SDDC will utilize freshly allocated IP address ranges.