Customers often ask how to estimate egress costs when considering a move to VMware Cloud on AWS. There is often an assumption that a move to Cloud will result in enormous, unpredictable costs accrued from data egress charges. The truth is that while these costs are variable, they are not unpredictable and can be managed.

There are three main egress points from VMware Cloud on AWS environment. Data egress over the Internet, Direct Connect (DX) or over the Elastic Network Interface (ENI), into the connected VPC. 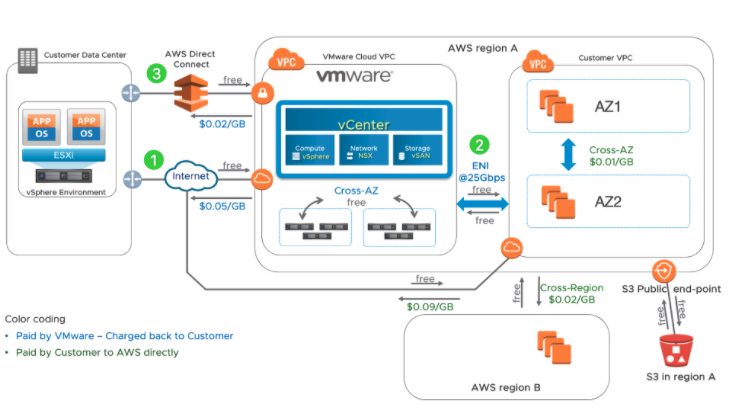 Egress costs over the Internet

When adopting VMware Cloud on AWS, the first and most common starting point for customers is to set up a VPN connection to another environment (usually an on-premises datacenter) or access services running on VMware Cloud on AWS directly over the Internet.

The cost for data “exiting” VMware Cloud on AWS over the Internet is the amount of data exiting through that connection in GB x $0.05, which is the egress charge per GB from AWS cloud space.

The $0.05 per GB rate captures regions in the US and Europe. Always verify the correct rate for the chosen region of deployment.

ENI is the high speed, low latency connection between a VMware Cloud on AWS SDDC and native AWS. This is often the next step in a customer's journey as they integrate AWS services into VMC.  For example, customers usually start by accessing an S3 endpoint for backup purposes.

This powerful connection enables customers to fully integrate traditional VMware Operations into AWS Services. However, variability in how it's metered depends on how much of the AWS infrastructure is traversed.

Any traffic going over the ENI is free in the same Availability Zone.

Any traffic that goes over ENI and then between Availability Zones is metered at $0.02 per GB.

Any traffic going over the ENI and then travels between AWS Regions is metered at $0.02 per GB.

Depending on the use case, customers may decide to implement DX connections. The cost for data “exiting” VMware Cloud on AWS over DX would be the amount of data exiting through that connection in GB x $0.02 (which is the egress charge rate over DX).

The $0.02 per GB rate captures regions in the US and Europe. Always verify the correct rate for the chosen region of deployment and DX provider.

A Stretched Cluster spans two AWS Availability Zones and data is synchronously written in both AZs, to provide the higher availability and therefore the higher (4x9s) SLA.

In late 2019 we announced a 95% discount on the Cross AZ network fees resulting from Stretched Cluster operations. Under this new rate, the same 100GB of traffic would cost just $0.10!

To put this into perspective, for the $10,000 USD limit to be reached, the data transfer between the two sides of the stretched cluster has to exceed 10PB per month!

In practical terms, it means that data charges, resulting from stretched cluster operations are no longer a concern for customers.

What about a complete cloud Exit?

The question of “What will it cost to completely exit VMware Cloud on AWS?” comes up occasionally. A fair question, especially provided that the VMware Cloud platform provides operational consistency and seamless workload portability across Clouds.

The cost for a complete exit from VMware Cloud on AWS for every workload VM running on that environment would be the amount of Virtual Machine Data x Data Transfer Rate +/- 10%.

Because the data rate is variable, it may be good to allow 10% to account for any data transfer overhead or changes. That extra 10% is there to account for data packet headers, re-transmit operations and so on. Some of that could be offset by WAN optimization technology, if using HCX for example. 10 % is a good estimate.

It is important to note that the Virtual Machine Data variable is the data the VMs will be managing at the time of egress. So, if looking to estimate that after a certain period of time, let’s say one year, it may be good to factor projected data growth within that year.

ACME Inc is going through a datacenter consolidation project. As part of their cloud-first strategy, they have identified 100 VMs which are good candidates for the first wave of migration and have chosen VMware Cloud on AWS to host those workloads. The total storage capacity of those VMs is 10,000 GB. Because these are business-critical VMs, they have decided to deploy a stretched cluster.

ACME Inc would like to know more about data charges affecting their new VMware Cloud on AWS environment, however, they cannot dedicate the time and resources to run extensive data analysis, because these workloads have to be migrated quickly, in order to comply with a DC exit deadline. Estimates will be sufficient.

ACME INC decided to use HCX to migrate the VMs and estimate that they will migrate all 100 VMs within the 1st month. Connectivity to their on-premises environment is required. Initially, that will be done using VPN.

The total amount of virtual machine data is 10,000GB, and the time frame is one month.

We will follow best practices and ensure that all VMs are SLA compliant, which means Dual Site Mirroring policy is applied for all VM objects. All VMs will be placed in the AZ in which the NSX edge resides.

When we start migrating the VMs, all of the 10,000GB data will have to be mirrored across to the second AZ. With the recent announcement, that cost will be 0.

We know that cross AZ charges occur from day-to-day data operations, not just virtual machine migrations. However, when dealing with a Stretched Cluster, these fees have been virtually eliminated.

In the case of ACME INC, even if they migrated and then deleted all of their VM data every day of the month, they still would not come close to the 10PB or $10,000 threshold.

Finally, egress costs result from normal day-to-day operations, such as network communication – data packets being sent between machines. Those are harder to estimate, as they are very dynamic and unique to each environment.

That is not to say it is unknowable. VMware's vRealize Suite can assess Virtual Machine traffic to expose how a group of VMs interact with each other, what services and ports they are using, and so on.

With this information, we obtain a granular understanding of the environment and can refine any egress estimates.

Egress costs for a complete exit

If ACME INC decide to move their workloads away from VMware Cloud on AWS, and they decide to do that over the Internet, the estimated cost would look something like this:

About the Author and Contributors

The original content for this guide was written by Elena Krasteva.  Elena is a Senior Cloud Solution Architect, with a specialist focus on VMware Cloud on AWS. Since joining VMware in early 2019 she has helped customers solve complex business problems using VMware Cloud Services across the UK.