The first cmdlet we’ll walkthrough using is the one which creates a new SDDC, New-VmcSddc. This cmdlet requires fairly minimal information such as SDDC name, AWS region, and how many hosts the SDDC should have. We also have the ability to specify the management subnet CIDR as a parameter too, but that parameter is optional.

One big item of note, at the time of the PowerCLI 11.5 release, it can only provision one host SDDCs without an AWS account being linked. We do plan to improve the cmdlet in a future release to support all SDDC deployment configurations.

Here’s an example of creating a VMware Cloud on AWS single host SDDC where we don’t link an AWS account:

We can also create a standard, 3 host or larger, SDDC which requires an AWS account be linked.  The first thing we’ll need to obtain, the AWS account we’ll be using. That information can be found with the following command:

We’ll store that output in a variable and move on to the next step, which is to pick out our desired AWS VPC Subnet. We can use a single cmdlet to do this, however we will need to reference the AWS Account and which region the VPC should reside.

We can find the available VPC subnets with the following command:

At this point, we have all the information needed to create our SDDC. With some minimal updates to the command from the previous section, we can create a new 3 host SDDC, have it linked to our AWS account, and using our requested VPC subnet with the following code:

We’ve created two SDDCs in the prior sections, now it’s time to find out what information about each of these SDDCs are available. The Get-VmcSddc cmdlet will turn several lines of API interaction into a single line.

We can find out some basic information about our newly created SDDCs with the following command:

The above shows some great high-level information. However, if you’ve seen the API response, there’s a lot more information available to us. We can find some additional information about a particular SDDC by piping that command to Format-List. An example: 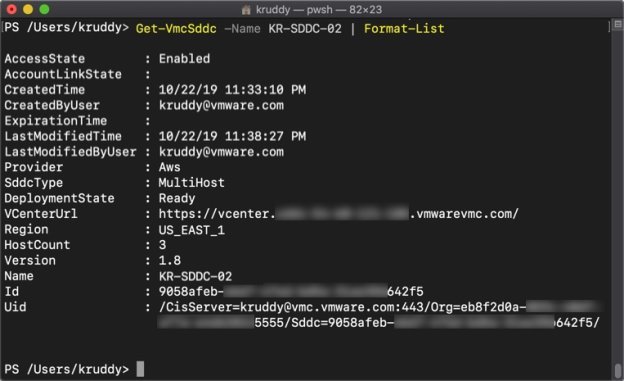 The above examples shows some important information, such as AWS region, how many hosts the SDDC has, what version the SDDC is on, and even the URL to reach the vCenter server. One thing you may notice is missing though, ExtensionData. This property, and all the information it provides us, is something that is not available at this point in time. We hope to add it in a future release.

In the meantime, you can take the information provided here and simplify the process to retrieve the rest of the properties which make up the SDDC object from the API level. An example to do that is as follows: 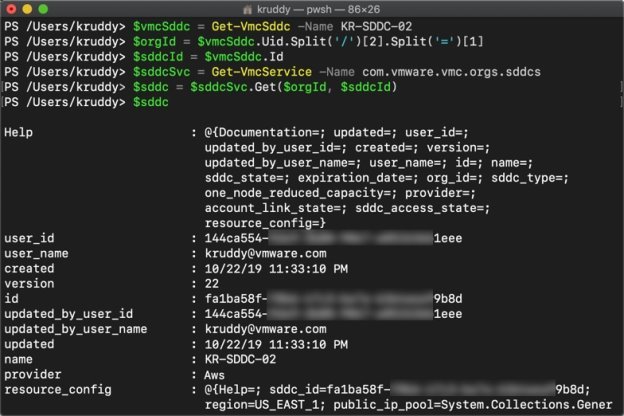 One of the amazing parts about a service such as VMware Cloud on AWS is that we can add and remove ESXi hosts to our SDDC in a matter of minutes. We have two cmdlets to make the management of our ESXi hosts as simple as a one-liner.

We can add a single new host to our SDDC with the following command:

Similarly, we can also remove a single host from our SDDC with the following command:

In the above examples you’ll also notice the flexibility to several different methods of input for each command, whether that be variables or even using a pipeline.

Completing the lifecycle management of an SDDC is the removal of our created SDDC. Much like the prior create and retrieve cmdlets, we also have a cmdlet to delete an SDDC.

We can remove our SDDC with the following command:

We can update the name of our SDDC with the following command:

Another cmdlet is able to help us out when it comes to retrieving, and even reporting, on tasks within our Organization. Get-Task supports these VMC based tasks. If you’ve had a change to view the tasks for any given Organization, unlike vSphere tasks, they are available for quite a long time so the output could be unexpectedly longer than expected.

We can retrieve the tasks of our Organization with the following command:

Each of these tasks are objects, so we can take one of those tasks and expand the available properties with Format-List by using the following command: 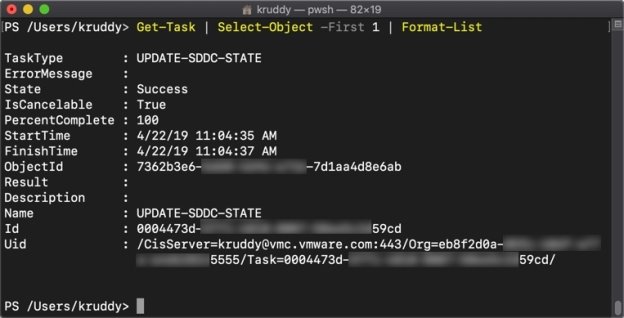