As shown in Figure 1, the high level reference architecture shows how to secure the communication between on-premises and VMware Cloud on AWS SDDC running over an internet connection, using IPSec VPN. 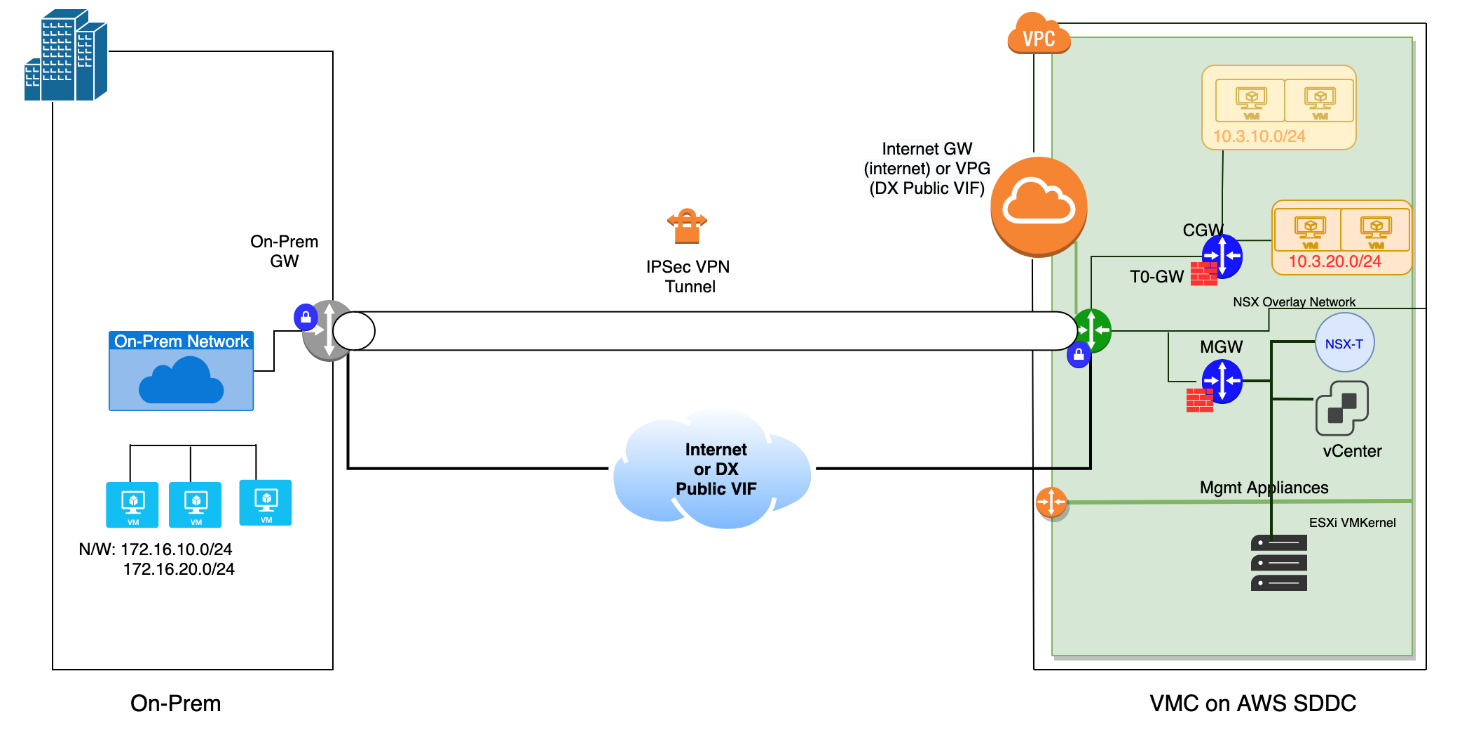 Traffic flows between the on-premises network and VMware Cloud on AWS using an IPSec VPN tunnel. The reference architecture for IPSec VPN consists of the following major components, regardless of the type of IPSec VPN being used.

Before you decide to choose IPSec VPN for your on-prem to VMware Cloud on AWS SDDC implementation, note the following design considerations:

The architecture of IPSec VPN implementation depends heavily on the selection of devices and software to provide IPSec services within existing infrastructure. Proper selection of devices used to implement IPSec VPN is key for successful IPSec implementation. For instance, if you plan to use firewall itself as IPSec VPN gateway for your on-premises datacenter, then too much load on such integrated device might impact the functionality of one component over another (IPSec being computationally intensive may impact functionality of firewall in this particular case).

Due to the layered approach towards securing enterprise networks, IPSec gateway placement is a challenging task. Hence, careful placements of devices used to implement IPSec VPN is also very important. If your on-premises VPN gateway is behind a firewall, you must configure that firewall to forward IPsec protocol traffic.

Availability of VPN gateway is also an important point to consider while architecting implementation of IPSec VPN. You may want to protect the on-premises VPN gateway with a highly available instance or providing fault tolerance for VPN gateway. On the VMware Cloud side of SDDC, you may want to have availability across regions or zones based on your requirement and cost considerations.

Latency also plays an important role for communicating between on-premise and VMware Cloud on AWS SDDC as it depends on the internet connectivity and bandwidth offered by the service provider. For example, you may want to reconsider hosting an application on VMware Cloud on AWS SDDC and providing accessibility to it to the on-premise users if it is business critical as higher latency may result in slow response from the application. On the other hand, you may want to have disaster recovery for on-premises workloads to the cloud in case if disaster strikes to on-premises and this can be achieved using IPSec VPNs.

Selecting the tunnel parameters like protocol, encryption algorithm, DH Group, hashing algorithm etc. is also an important key as both the endpoints may not support the recommended values, for e.g. VMware recommends the protocol value of IKE as v2, however, the remote VPN endpoint may only support IKE v1.

The choice of connectivity between the SDDCs depends on various factors such as location of the datacenter, application requirement, CAPEX/OPEX etc. After considering these factors, you may want to opt for a Direct Connect Private VIF connection (DX) or Internet-based connectivity.

DX is a dedicated connectivity that runs from your SDDC to AWS DCs. DX has low latency and high bandwidth as compared to the Internet-based connectivity (economical than DX). Many customers today use DX as a primary and internet as a secondary connectivity option.

With internet connectivity option, there is always a risk of "Man In The Middle" attack and IPSec VPN is one of the options to avoid such attacks. Typically DX is used for accessibility of business critical applications across the sites whereas VPN based connectivity over internet is suitable for use cases such as disaster recovery or non-business critical application across the sites where latency is not a requirement.

Policy-based VPNs help by encrypting and encapsulating traffic flowing through an interface according to a defined policy. Policy is applied to a specific interface and only interested traffic that crosses this interface gets evaluated by the policy. In context of SDDC, policy is applied to the uplink of NSX-T Tier0 Router. As part of configuration, the SDDC is configured with a default route which points to its upstream Internet Gateway (IGW). This means that all traffic which is non-local to the SDDC will be sent out through the uplink and will be matched against any IPSec VPN policies which are applied. If the traffic matches a policy, then it is encapsulated and sent through a VPN. Otherwise, it is routed normally to the IGW.

A route-based VPN creates a virtual interface and traffic hitting this interface is encrypted and decrypted according to the phase 1 and phase 2 IPSec settings. Compared to policy-based IPSec VPNs, route-based IPSec VPNs need extra configuration as they support dynamic routing over tunnel interface. With a route-based VPN, a dynamic routing protocol (such as BGP) is configured within the tunnel and routes are exchanged dynamically. Once the route-based VPN tunnel is established, there is simply no need to update it, even after you create additional network segments in the Cloud or on remote sites.

There may be a situation where the remote device (on-premises gateway in this case) does not support route-based IPSec VPN. The connectivity with VMware Cloud on AWS SDDC can still be established with policy-based IPSec VPN.

Policy-based IPSec VPN is one of the solutions for a point-to-point connectivity (example remote office/branch office) that does not require connectivity to other sites. 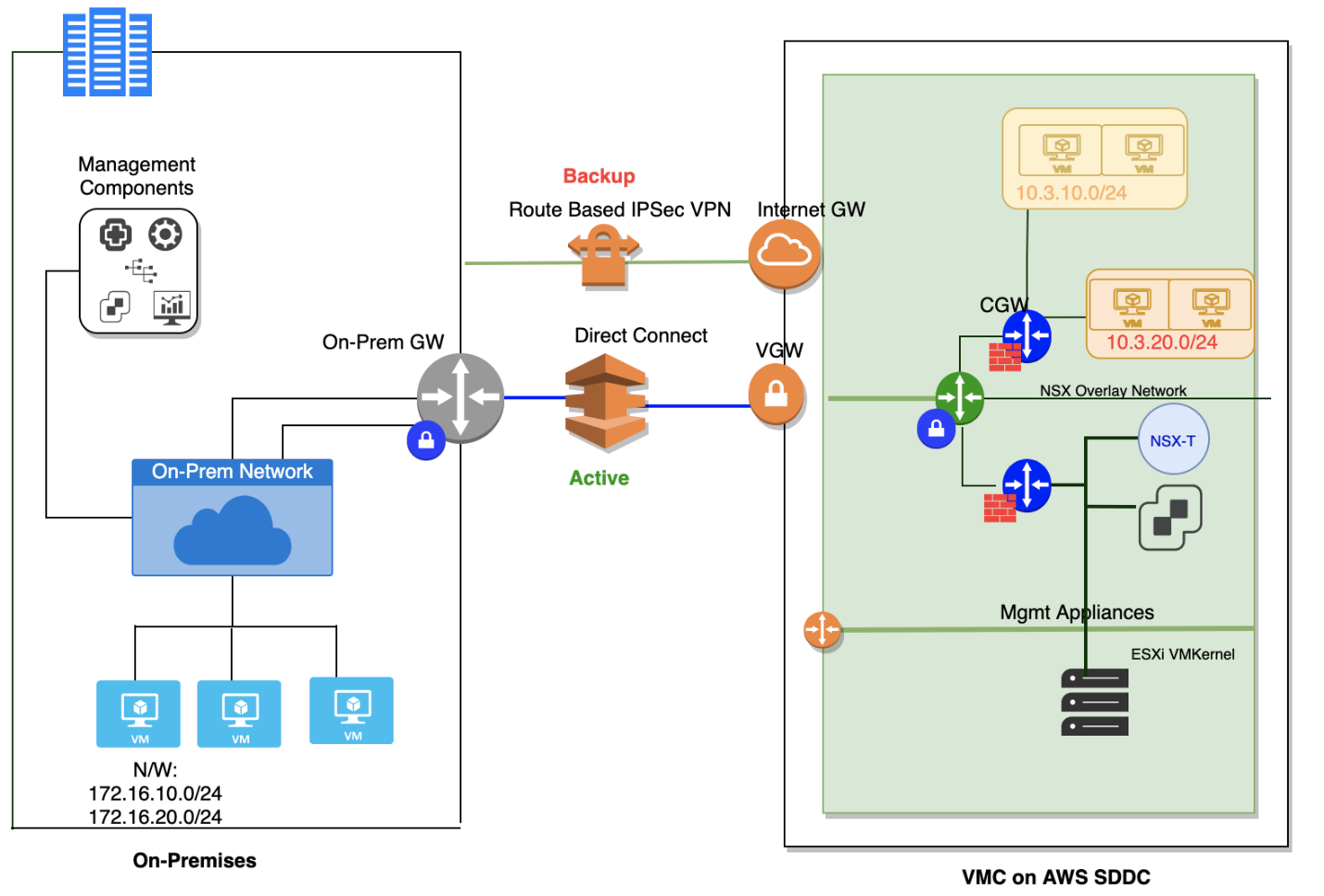 This use-case is suited for customers trying to save cost by using internet with route-based IPSec VPN running as backup to Direct Connect. 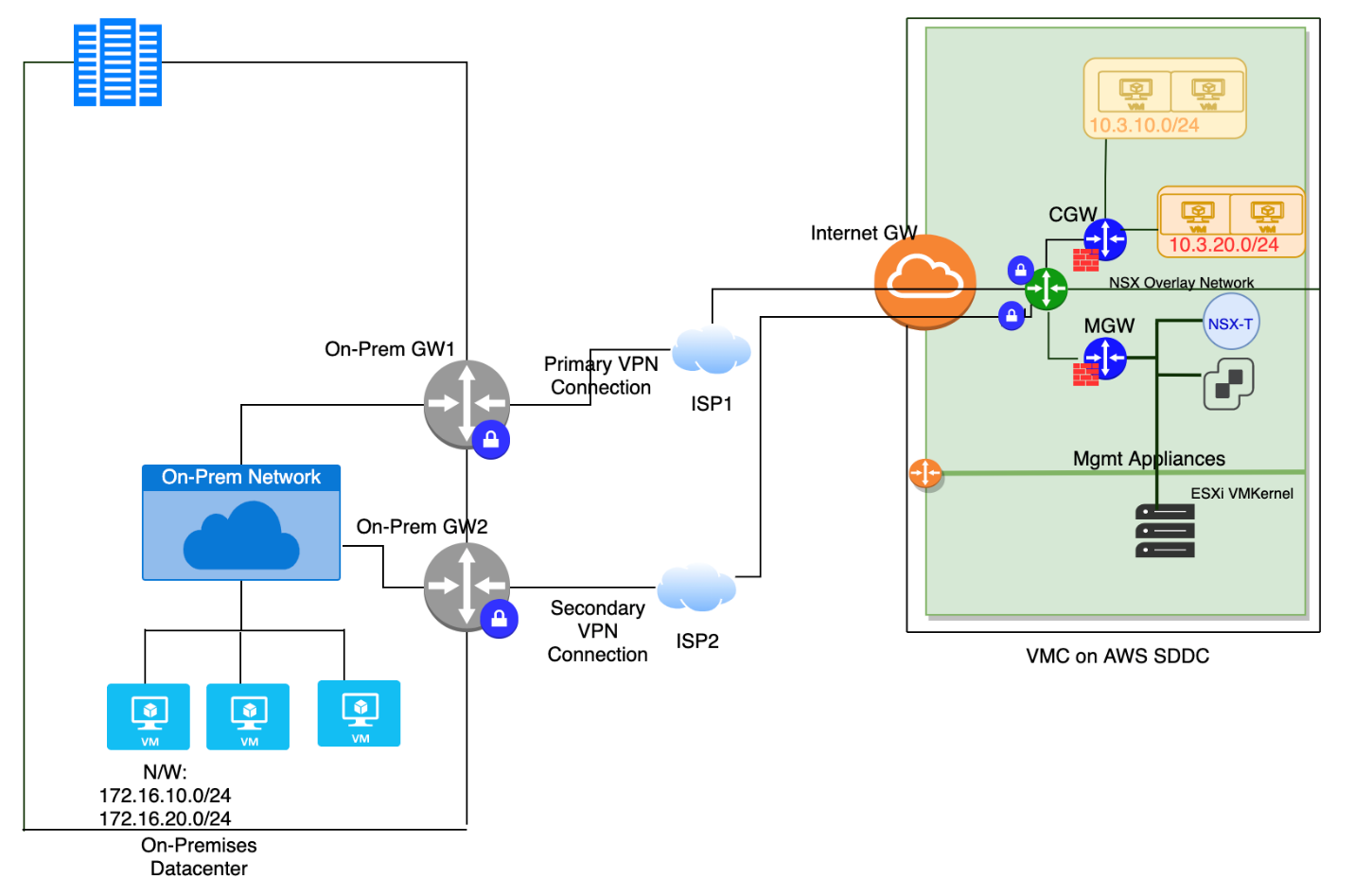 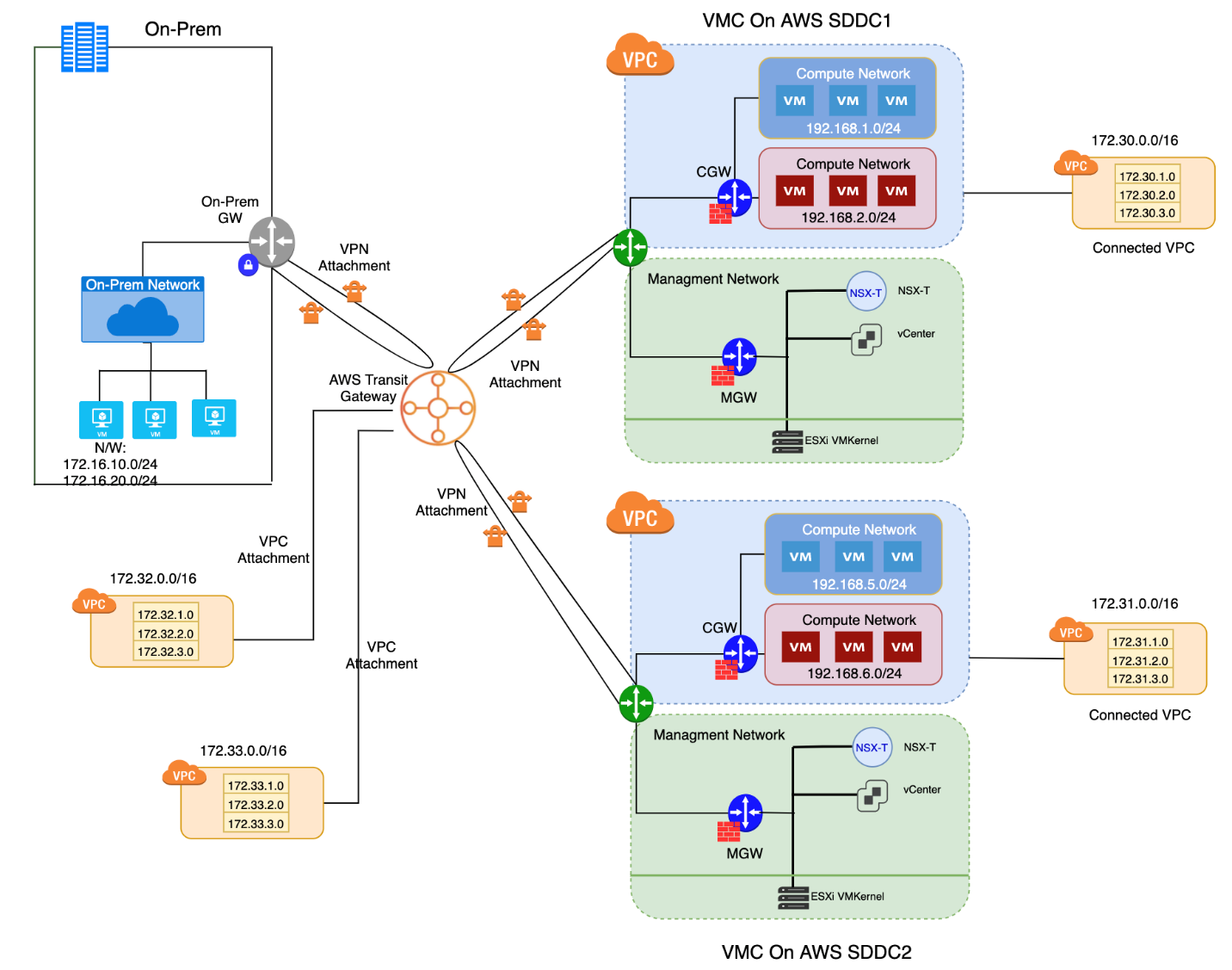 This use-case can provide any-to-any connectivity between the on-prem, VMware Cloud SDDCs and native AWS VPCs using AWS Transit Gateway (TGW). Route based IPSec VPNs can be leveraged on top of this to secure multipoint connections between VMware Cloud and AWS and and on-prem. 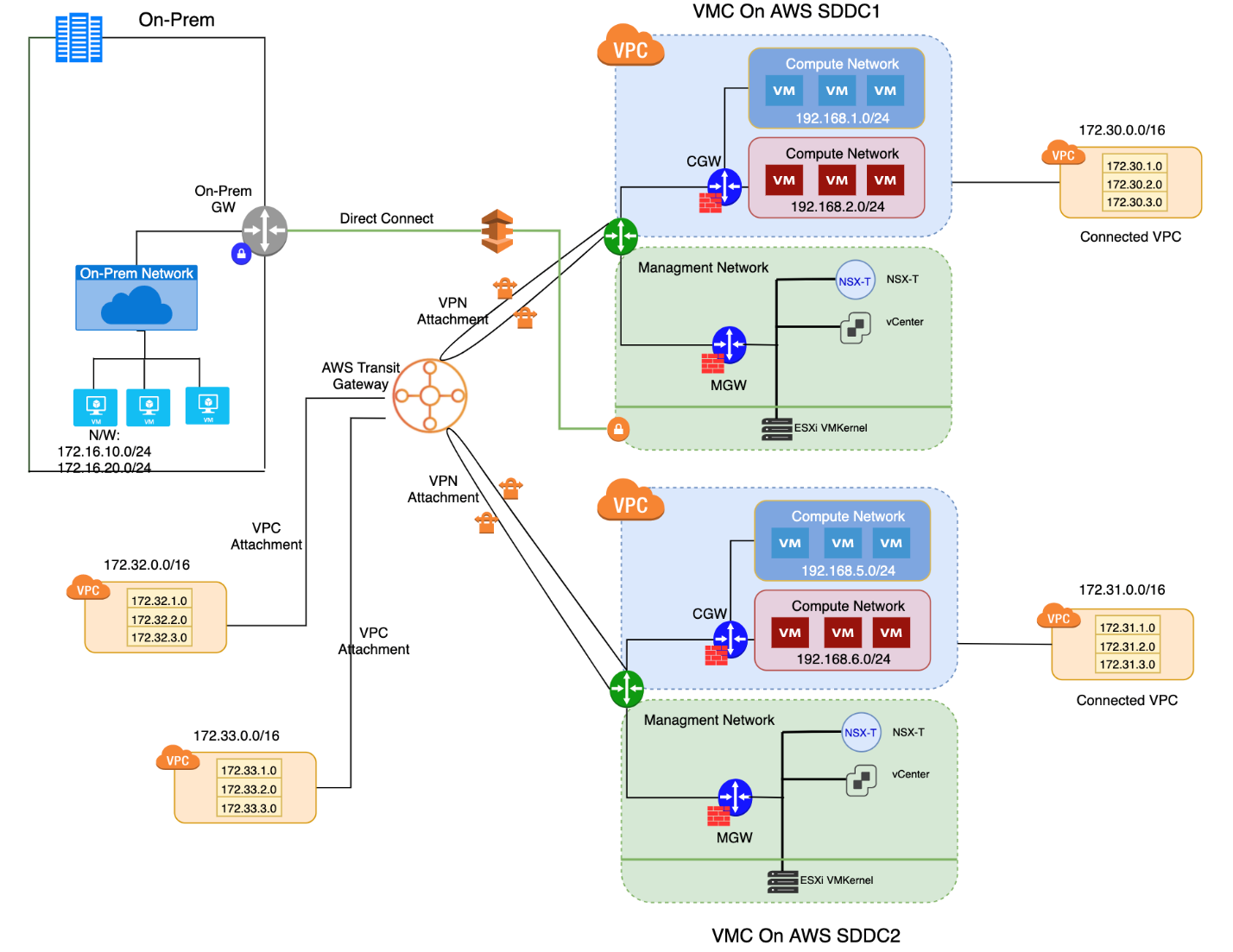 As shown in Figure 9, this use-case has Direct Connect (DX) VIF setup between on-prem VMware Cloud on AWS SDDC1. Following are additional design considerations for this use-case.