An Introduction to VMware Transit Gateway for VMware Cloud on AWS

VMware Managed Transit Gateway (vTGW) enables connectivity across environments and adds networks with automatic set up of all the necessary routing policy configuration, transparent to the user. Since it is a VMware offering, it reduces overhead of self-deploying and managing complex configurations to establish a connectivity fabric across VMware Cloud on AWS SDDCs, AWS VPCs and on-premises environments.

Scope of the Document

This document introduces VMware Managed Transit Gateway (vTGW), its architecture, and the supported deployment scenarios as of SDDC Release 1.12. Recent features such as transit Virtual Private Cloud (VPCs) and inter-region vTGW are out of scope and will be covered in separate documents. 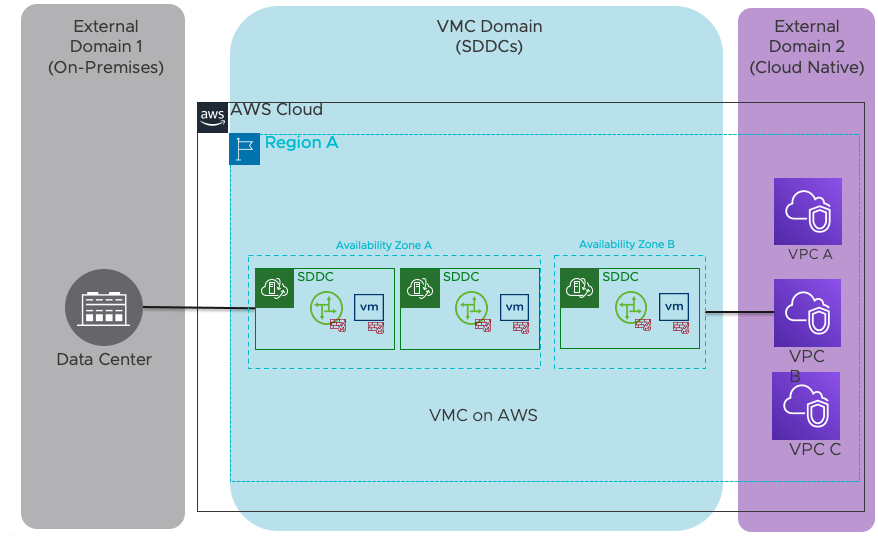 As shown in Fig. 1 above, the key challenge is to provide connectivity across all the three domains and support future connections as well. vTGW is a perfect solution which groups SDDC in VMware Cloud on AWS enabling Inter-SDDC connectivity along with on-premises and AWS services.

Design Considerations and Caveats for vTGW

Keep the following considerations and caveats in mind before vTGW deployment: 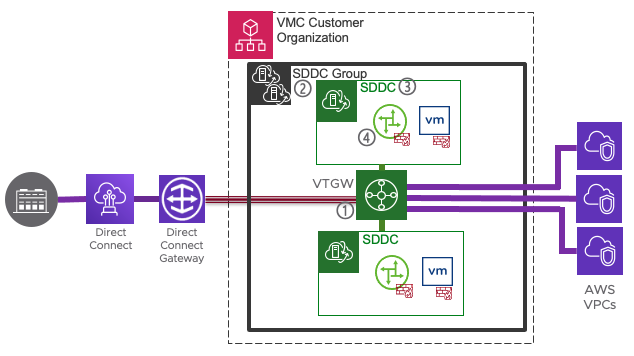 As shown in Fig 2, VMware Managed Transit Gateway (vTGW) acts like a hub that has ability to connect to multiple endpoints such as Direct Connect gateway and multiple VPC attachments from both native AWS VPCs and Connected VPCs from a VMware Cloud on AWS SDDC. Fig 2 also shows the high-level architecture of vTGW connecting two SDDCs.

The major components of a vTGW (highlighted in the figure 2) are listed below:

Note the following requirements to set up vTGW:

There are three supported designs with vTGW– SDDC to SDDC, SDDC to VPC, and SDDC to on-prem. 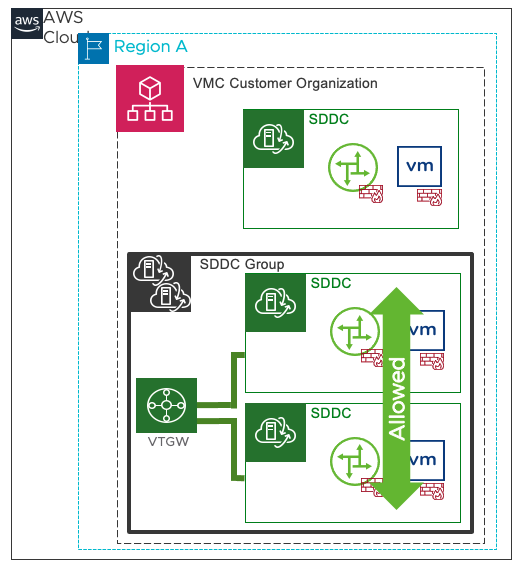 After the SDDCs are connected to the SDDC Group, depending on the firewall rules set on the MGW and CGW: 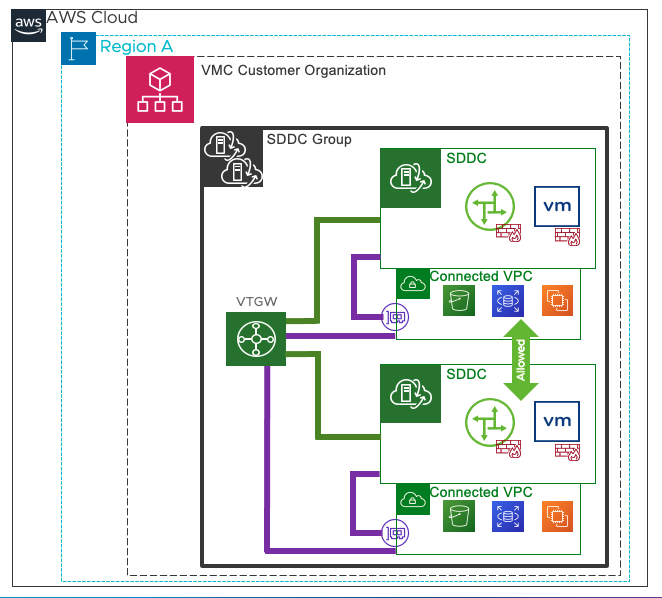 The following rules apply to Connected VPC at their respective SDDCs:

Following are some of the characteristics for SDDC to VPC Connectivity: 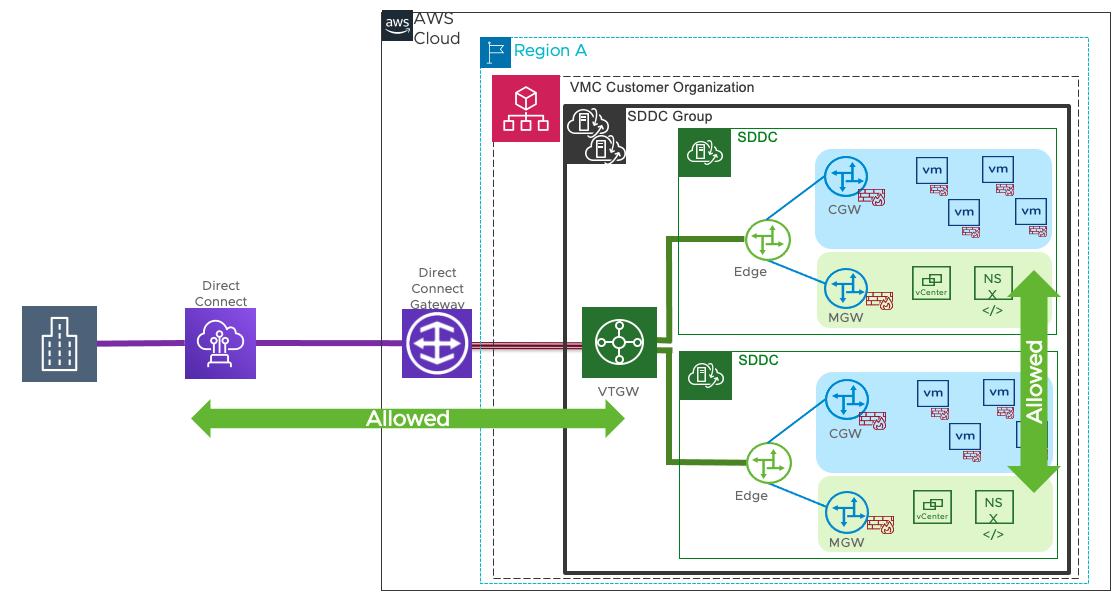 As shown in Figure 6, here the vTGW facilitates the connection between VMware Cloud on AWS SDDCs and on-premises with Direct Connect (private VIFs). Additionally, the vTGW may also have a native AWS VPC connection that was shown earlier in Figure 5. Following are allowed traffic flows from on-premises to VMC on AWS SDDC: 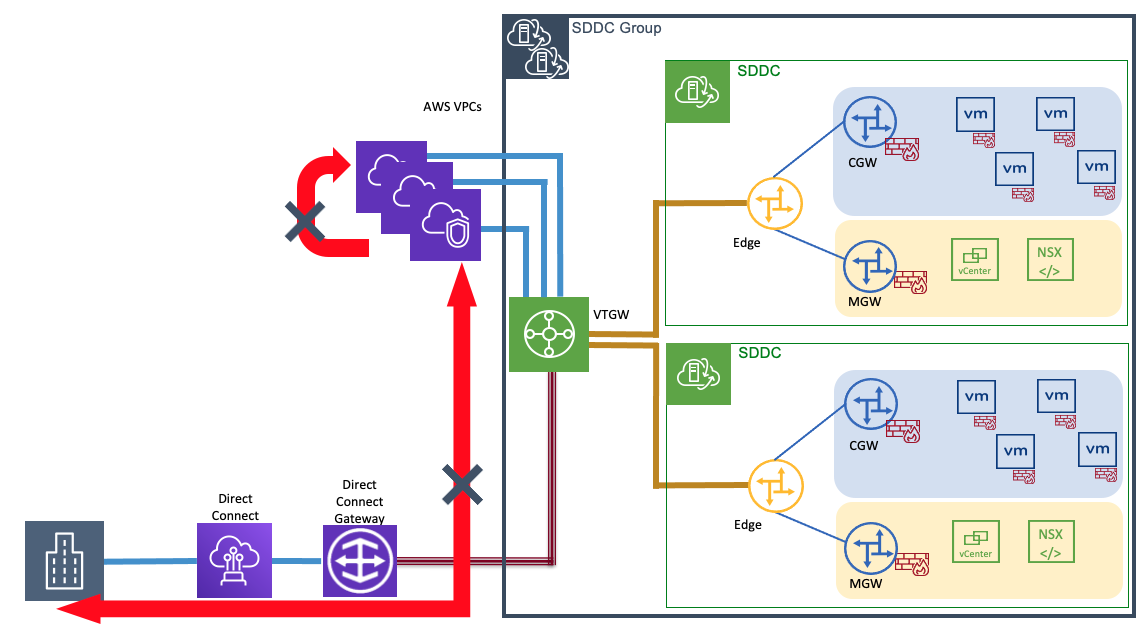 Following are the denied traffic flows as indicated in Figure 7:

Note the following highlights of this alternate design as shown in Fig 8 above:

The following authors have contributed to this article.