Amazon's global infrastructure is broken up into Regions.  Each Region supports the services for a given geography.  Within each Region, Amazon builds isolated and redundant islands of infrastructure called Availability Zones (AZ).  When VMware deploys a vSphere Cluster as part of the VMware Cloud on AWS managed service; all hosts for a given cluster are placed into a single AZ.  As a result, VMware Cloud on AWS clusters are vulnerable to the incredibly rare but real threat of an AZ failure.  To negate this consideration, Amazon recommends deploying a given service across multiple Availability Zones; utilizing network failover to mitigate any failures.

When selected, a vSAN Stretched Cluster is created across three AZ's, creating a vSphere Cluster that can survive the loss of entire Availability Zone.  This requires an AWS VPC with two subnets, one subnet per availability zone. The subnets determine an ESXi host placement between the two availability zones. To protect against split-brain scenarios and help measure site health a managed vSAN Witness is also created in the third AZ.  The Witness has been engineered to run on an EC2 M5.XL AMI to reduce the cost to the customer.

During the Create SDDC request, the cloud admin selects which VPC subnet should be linked to the tenant workload logical network.   In doing so they are implicitly also designating which AZ the vSphere hosts are deployed in.

Finally, vSAN Fault Domains are configured to inform vSphere and vCenter which Hosts reside in which Availability Zones. Each Fault domain is named after the AZ it resides within to increase clarity. Logical networks are also extended using NSX to support workload mobility across the two AWS availability zones.

The following demo shows how to deploy a stretched cluster and also explains the failover process:

Upon initially logging into your newly provisioned Multi-AZ SDDC vCenter instance you will discover what appears to be a standard vSphere Cluster.  Taking a closer look, Fault Domain configuration reveals a fuller story.  Here we can see how the nodes have been evenly split between the two AZs specified in the SDDC creation wizard.  We can also see the vSAN Witness node deployed as a stand-alone host (which, as mention above, is actually an EC2 instance rather than an actual physical host).  Furthermore, we can see that the Cluster can survive the loss of any single Fault Domain without impacting running workload. 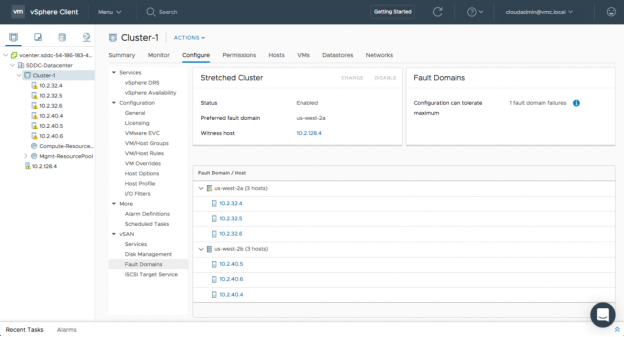 However, there isn't anything to "manage" on the VMC Cluster.   VMC on AWS abstracts away all the complexity traditionally associated with running a multi-site active/active vSphere Cluster.  Perhaps more importantly, VMware operations are responsible for the monitoring and maintenance of the Cluster.   The only thing that customers need do to make VMs capable of surviving the loss of an entire Availability Zone is to configure the VM Storage Policy. 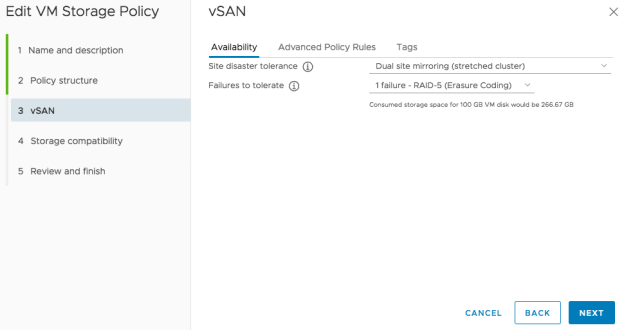 Diving into the Site Disaster Tolerance settings, we discover that we can control where our data is stored.  There are three options for managing data placement. 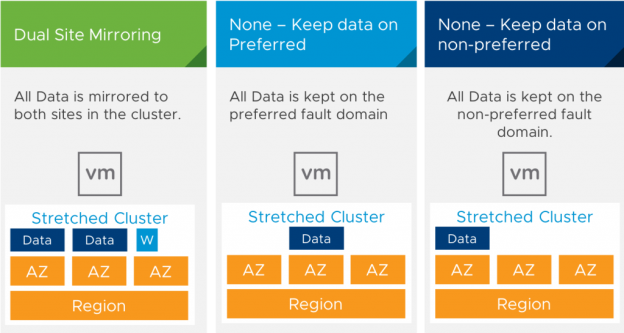 Similarly, the cloud admin can specify how vSAN should store the data within each fault domain via the Failures to Tolerate setting.  Failure to Tolerate is a simple concatenation of the previous Failure Toleration Methodology (FTM) and Secondary Failures to Tolerate (SFTT) settings.   The new interface removes all guesswork from policy authoring. 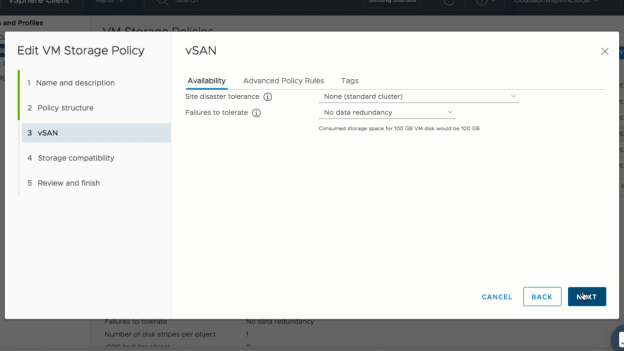 Merely declare how you would like vSAN to protect any individual VM and or VMDK and the underlying storage system will make it so.  By assigning a Site Disaster Tolerance setting of Dual Site Mirroring in a VM Storage Policy you can make any VM resilient to an AZ failure. In the event of a failure, vSphere HA will restart the affected VM on the surviving hosts. 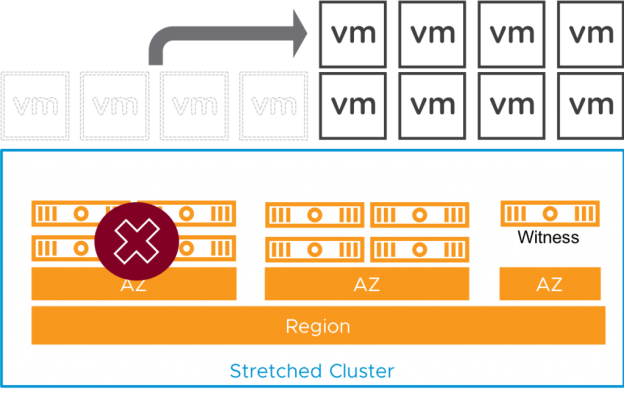 This capability is the Cloud equivalent of an On-premises vSphere Metro Storage Cluster. The enabling technology here is vSAN, and its ability to synchronously commit any writes across two fault domains (AZ's). 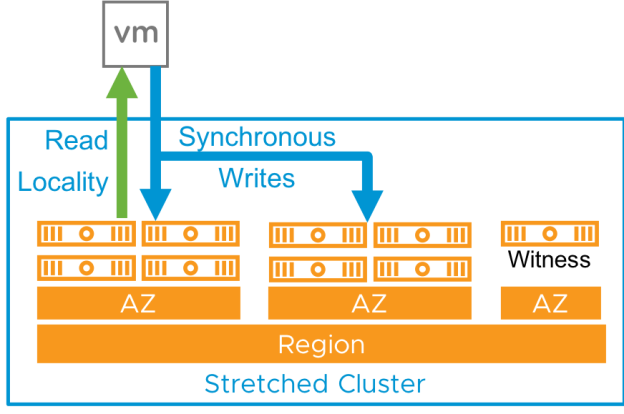 However, Stretched Clusters for VMware Cloud on AWS allows customers to manage costs by enabling local and site-wide availability to be tuned to the needs of each individual item via VM Storage Policy assignment.