This is an article by Patrick Kremer, a VMware Cloud Solution Architect, with extensive contributions from VMware storage and availability guru John Nicholson.

Because the clusters in VMC are hyperconverged, storage becomes a critical factor that drives cost. You cannot scale storage without increasing node count.

The reason for this is how the guest OS deletes files – older OSes just mark the file as deleted in the file allocation table. The unused blocks don’t get zeroed out, and the hypervisor has no clue that the blocks were released by the guest OS.

Modern guest OSes support using the TRIM/UNMAP commands to free space, but the hypervisor has to be able to handle the commands. No VMFS version prior to VMFS6 supports automatic free space reclamation. In VMFS5, you have to run the command manually.

We have customers running many versions of guest OSes and tons of VMFS5 filesystems out there. The end result is that we often find many TB of wasted space. While this can be no big deal on-prem with an array that is also doing thin provisioning, this thin provisioned growth can cause some major sticker shock when the node count is unexpectedly large due to wasted space.

Take this real-world customer output from a Live Optics analysis. Virtual disk used is how large the thin-provisioned VMDKs have grown. Guest VM disk used is how much space the guest OSes are actually using. The reclaimable figure is how much wasted space could be reclaimed – just shy of 500TB!

How do we get this space reclaimed? There is a great vSAN post on the topic – it starts with how to enable TRIM/UNMAP on on-prem vSAN, which doesn’t apply to VMC, but the rest of the post applies to both on-prem and VMC.

To get UNMAP support enabled in VMC, open up chat support and ask for it. Chat support will open a ticket with VMware’s SREs and they will enable the feature flag. 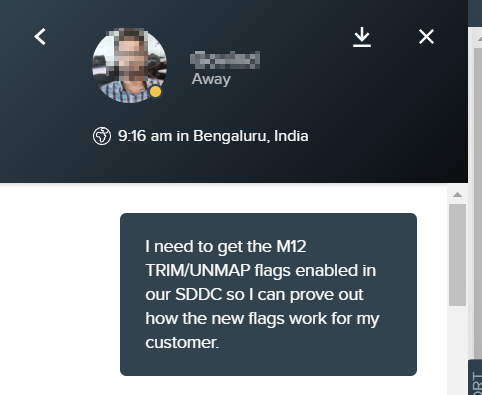 After the flag is enabled, you must reboot every VM that needs to use the TRIM/UNMAP function. You can wait for a monthly patch window to do this automatically or schedule a maintenance window with a rolling reboot across your fleet of VMs.

Here’s how it looks. TRIM/UNMAP is enabled in my VMC cluster, I have rebooted this Windows VM, and I attached a 100GB thin D: drive to it. I have a single 8.2GB file on the D drive

I look at the VMDK’s size and discover it has grown to about 8.4GB

I make 2 copies of the file.

The D drive now shows about 24GB in use

I refresh my WorkloadDatastore and find the VMDK size has grown to about 25GB.

I delete 2 of the .iso files from the Windows VM and my VMDK size shrinks back down to 8.4GB.

After TRIM/UNMAP is enabled, it will work on any new deletes. This is great for future space reclamation, but it doesn’t help you on current VMs. What if your VMs are already in VMC and you need to shrink them?

To illustrate this, I’m going to take advantage of the advanced configuration flag disk.scsiUnmapAllowed = false. This flag is used to stop a VM from using the TRIM/UNMAP commands. This is useful if you have a workload that has extremely heavy delete activity and you don’t want to take the performance hit of constantly reclaiming free blocks. 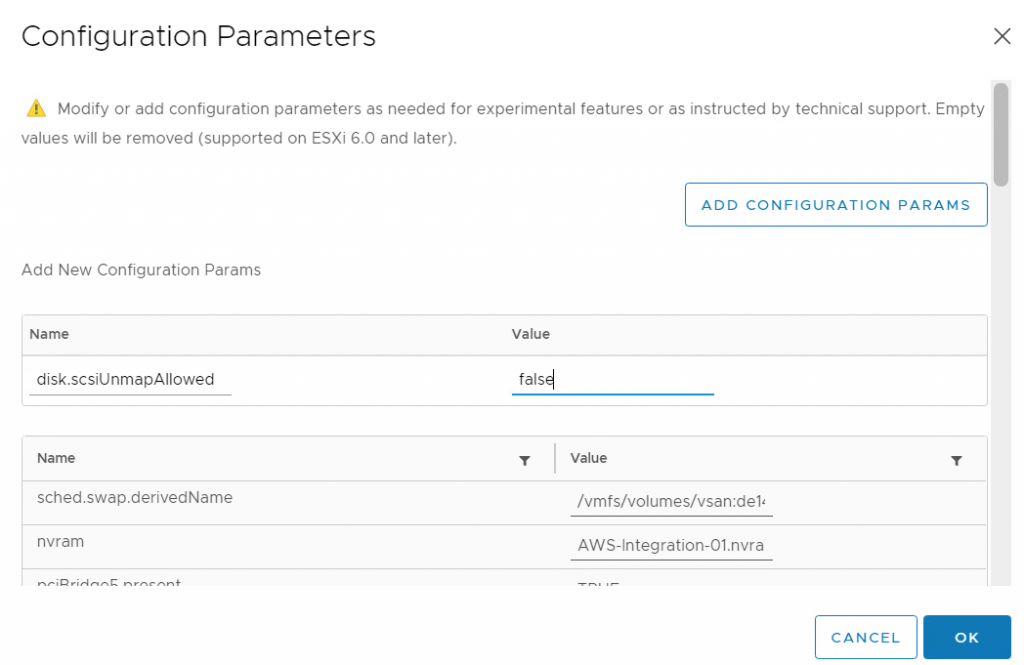 I power the VM back up and make the same 2 .iso file copies as before, and see my VMDK grew to 25GB.

Now I delete the 2 ISO files. When TRIM/UNMAP was enabled, the VMDK shrank back down to 8.4GB. But now it doesn’t shrink – it remains at 25GB.

I power off the VM, remove the disk.scsiUnmapAllowed = false configuration parameter, and power the VM back on. The VMDK size is unchanged.

Now I use one of the reclamation techniques from the vSAN post I mentioned earlier.

You can see my first attempt failed with a relatively useless error message. The problem ended up being that the Optimize-Volume cmdlet is dependent on the Optimize drives service – in my case, the service was set to disabled, so I set it to Automatic and enabled it.

I check the size of the VMDK, and it has shrunk.

The new TRIM/UNMAP feature can help keep your thin provisioned disks as small as possible, keeping your VMC node count and corresponding costs down.