Hybrid Linked Mode is based on the Enhanced Linked Mode feature that’s a part of vSphere when deployed in your on-prem environment.  However, there are key differences, and the rest of this article will go over this feature in detail.

When a Cloud SDDC is deployed (a Cloud SDDC is an SDDC consisting of vCenter Server, ESXi, vSAN, and NSX deployed in the VMware Cloud on AWS service) and configured it is setup as its own stand-alone vSphere Single Sign-On domain. In order to manage both a VMware Cloud on AWS and your on-premises vSphere SSO domain together, these two separate SSO domains need to establish a trust. They also need to continue to retain their autonomy since HLM has the flexibility to be created and destroyed at will. For example, if we create HLM between a Cloud SDDC and an on-premises vSphere environment, we don’t want the two environments to become fundamentally dependent on each other. This gives us the ability to tear down HLM without breaking permissions.

The requirements for HLM can be found in the product documentation.  There are also a few prerequisites which need to be in place prior to configuration.

A VPN connection must be established between the VMware Cloud on AWS management gateway and the on-premises environment.

By default, the firewall in the VMware Cloud on AWS console is set to deny all. The assumption here is your on-premises vSphere environment already has the necessary firewall ports opened. The required firewall ports for HLM to properly work are documented in Hybrid Linked Mode Prerequisites.

Enter the on-premises DNS server(s) in the VMware Cloud on AWS management gateway to resolve the on-premises identity source and Platform Services Controller which will be used when configuring HLM.

Note: make sure you can resolve the VMware Cloud on AWS vCenter Server in your on-premises environment.

From the hosts and clusters view you can see and manage both your vSphere on-premises and cloud SDDC environments in a single view while retaining separate permissions. 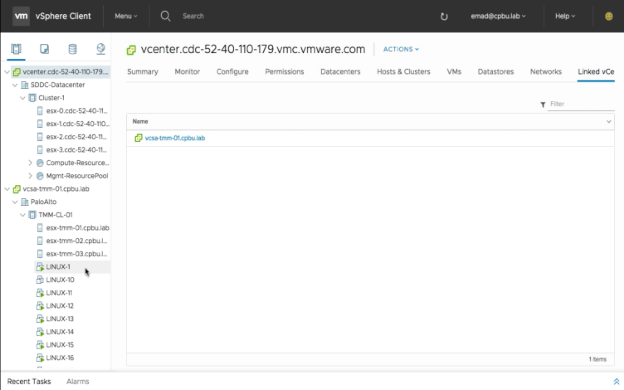 We can now move workloads via cold migration between our on-premises and cloud SDDC by simply right clicking on a single VM or multiple and selecting migrate. The same migration wizard that you use today on-premises is used, which is another benefit of VMware Cloud on AWS. Now your current on-premises vSphere skills translate to the cloud and you can just focus on the important piece – workload management – while VMware takes care of the rest.