VMware Cloud on AWS delivers consistent vSphere-based infrastructure that runs on Amazon EC2 elastic, bare-metal instances that are dedicated to each customer. VMware Cloud on AWS supports several types of clusters that accommodate use cases ranging from evaluation and experimentation to complex applications support. To accommodate the needs for flexible and cost-effective vSphere based cloud infrastructure, we expanded the entry-level cluster offerings in standard and stretched SDDC configuration. Recently added entry-level stretched cluster configurations (two (1-1-1) and four (2-2-1) hosts) enable customers to leverage intelligent AZ placement even with just a handful amount of hosts.

For this article and in the context of the technical capabilities of VMware Cloud on AWS, we would count all clusters with two and fewer hosts in a single AZ as entry-level. The list includes:

IT architects are facing the challenge of combining business requirements, technical capabilities, and reduce risks. It's vital to understand possible trade-offs while planning to deploy and operate a small cluster.

vCenter Server or ESXi allows you to power on a virtual machine (VM) only if there are enough unreserved resources to satisfy the VM's reservation. VMs without any configured reservation require at least 32MHz and 100MB Ram to power on successfully.

We breakdown the constraint per cluster type:

Let us take a closer look and understand the reasons for CPU Reservation constraints in the primary two host i3 metal cluster. This type of cluster has a limited amount of available CPU Reservation capacity.

When you create a new or migrate an existing VM and surpass the value of 35 running workloads VMs; or when you set a CPU reservation on a VM above 1151 MHz and power on the VM, your VM experiences a failure and cannot be powered on. You will see a message "Insufficient resources to satisfy configured failover level for vSphere HA."

And a pop-up in the upper right corner with the entire message: 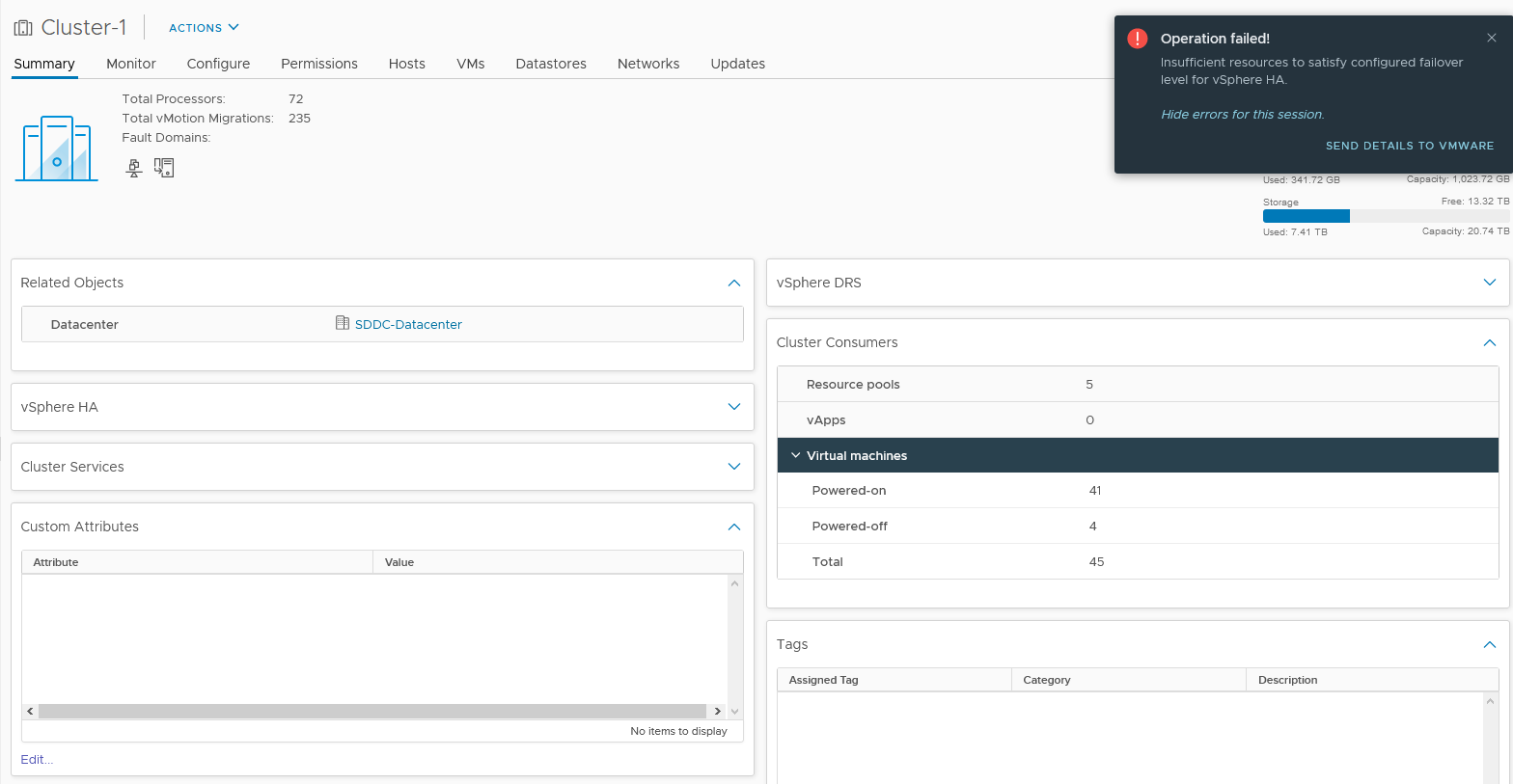 Let us break down the CPU Reservation details from the screenshot above in a table format, again using the i3.metal as an example as this instance type has the least CPU cycles available compared to i3en and i4i.metal.

Table 1: CPU Reservation in a two hosts standard cluster. The math behind the Numbers. 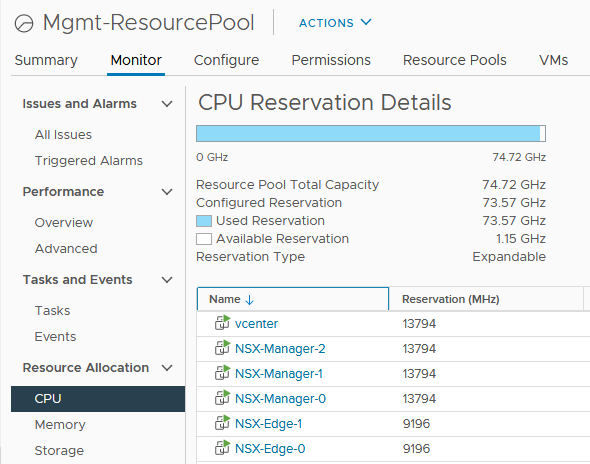 In general, you can deploy additional VMware solutions or VMware Cloud on AWS Integrated Services if the required CPU Reservation for the deployed VMs does not exceed 1151 MHz on selected cluster types. Setting up CPU Reservation to 1151 MHz would prohibit the ability to power on other VMs even without reservations. It's recommended to check the Add On specific documentation for more details.

VMware HCX supports two-host and 1-1-1 stretched cluster SDDCs on a best-effort basis.
An HCX deployment in a two-node cluster is only supported for limited production or proof-of-concept purposes.

For SDDCs with i3.metal hosts, HCX installations have the following limitations:

With the above limitations, all HCX operations work in SDDCs with i3.metal hosts, assuming the resource consumption of the workloads is not too high.  If an SDDC runs out of compute resources and the HCX infrastructure fails due to CPU contention, it may be necessary to scale up the SDDC to add more i3 hosts or scale down the workload allocation.

The above restrictions also apply to SDDCs with i3en hosts, except for the following:

Note: The Deployment of a vRNI collector VM with required CPU Reservation is not possible on entry-level clusters limited to 1151 MHz CPU Reservation.

Cloud architects may found the following use cases helpful for their cloud design ad implementation.

Note: if you want to leverage the Optimize for Rapid Scale-Out eDRS Policy, you must use at least three hosts cluster.

Entry-level clusters in VMware Cloud on AWS provide many design benefits and cost savings. Care should be taken when operating entry-level clusters based on i3.metal hosts not to surpass the available CPU reservation. This is of less concern when using i3en and i4i.metal clusters.