This document provides you with recommendations and guidelines on how to use VMware Cloud on AWS SDDC connectivity to native AWS with the Connected VPC.

There are several prerequisites and considerations that you must be aware of before you start using this connectivity.

All 2-node and higher SDDCs must connect to an AWS account and VPC at time of creation. This connection can be optionally deferred up to 2 weeks for 1-node SDDCs. The purpose of this connection is to allow the use of native AWS services, such as S3, RDS, Elastic Load Balancer, etc. directly from VMs running in your SDDC.

Refer to the table below for a summary of the use case, considerations, and other details to see what is possible with the Connected VPC.

There are a few key requirements and best practices to keep in mind when you are planning to access native AWS services from your VMware Cloud on AWS SDDC using the Connected VPC.

At the time of deployment, 17 Elastic Network Interfaces (ENIs)are created. Each ENI is assigned an IP address from the selected subnet, and labelled with a Description of "VMware VMC Interface DO NOT USE - _SDDC ID_##, where SDDC_ID is the ID of the SDDC, and ## is a number from 0 to 16. (See the documentation reference above for information about ENIs). An ENI is attached to each ESXi host in the SDDC's management cluster (Cluster-1) and has a status of "In-Use". They are not necessarily assigned in numerical order. One of the In-Use ENIs will have a secondary IP address assigned to it. This is the host running the active default Edge, and this secondary IP is used for SNAT of traffic to S3. Any additional ENIs are marked "Available" and are reserved for future host adds or replacements. This also means that 18 IP addresses from the selected subnet are consumed initially.

If the management cluster grows beyond 17 hosts (for example due to unaddressed storage growth, VMware may add hosts to prevent a disk-full situation), additional ENIs are created, and IP addresses assigned from the subnet. For this reason it's best practice to ensure that there are at least 33 IPs available in the subnet for the SDDC, and at least 33 available ENIs in the region (See the AWS VPC quotas page for more details. The current default limit is 5,000 ENIs per region in an AWS account).

In addition, the main route table must have sufficient capacity for all the SDDC's routes - one for the management CIDR, plus one for every routed segment in the SDDC. Since the default route table limit is 100 routes, you may need to request an increase from AWS if you require routes for your native AWS traffic and/or have a large number of routed segments in the SDDC. 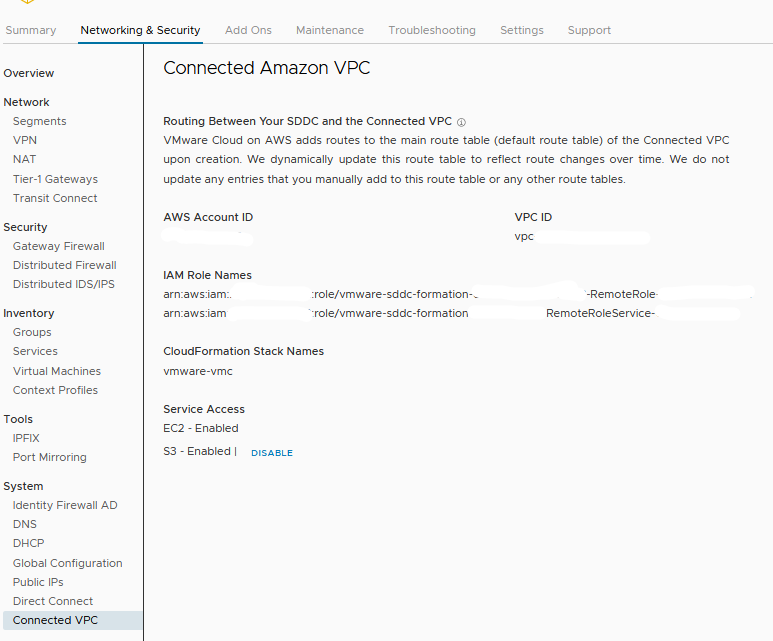 The diagram below is an example of the Connected VPC's main route table, where we can see 3 routes pointing to an ENI, for each of the 2 networks in the SDDC and the management CIDR, as well as an S3 endpoint (vpce-#). Note the destination for the S3 endpoint is a prefix-list (pl), which is a list of IP CIDRs, in this case one that is managed by AWS, and refers to the S3 networks for the Oregon region.

When an SDDC is connected to a customer AWS account (which is required for any production SDDC when it is deployed), the customer must select a VPC and a subnet. The AZ of the subnet determines which AZ the SDDC is deployed in. Always refer to the AZ of the subnet as shown in your AWS account, or use the AZ ID rather than AZ name, as AWS rotates the AZ name for each AWS account, but the AZ ID is consistent for all customers.

When configuring network access, the path from a VM in the SDDC to an EC2 instance in the AWS Connected VPC goes through the following network controls:

4. The AWS network ACL on the VPC. By default, the ACL allows all traffic. Note ACLs are not stateful, so traffic must be allowed in both directions for return traffic flows.

6. The firewall on the guest OS - if your guest OS has a firewall running such as iptables or Windows Advanced Firewall, it needs to be configured to allow the desired traffic.

When performing a traceroute to verify connectivity, first ensure that all of the security controls listed above allow the traceroute traffic, which could be UDP or ICMP, depending upon the traceroute command used by your guest OS. From a VM in the SDDC, after the default gateway, you first see a 169.254.x.1 IP, which represents the transfer between the T1 and T0 routers in the SDDC. Then, there is an IP from the management CIDR. For traffic going over the Connected VPC link it this address has the format A.B.C+1.81 for a management CIDR of /23 (e.g. for a management CIDR of 10.2.0.0/23, it is 10.2.1.81), A.B.C+10.129 for a CIDR of size /20, and A.B.168.1 for a CIDR of size /16. If the traffic is being sent over another path, you see a different IP from the management CIDR in that hop.

This path can also be verified and visualized using the NSX Traceflow utility, which is available from the NSX Manager UI (requires SDDC 1.16 or later): 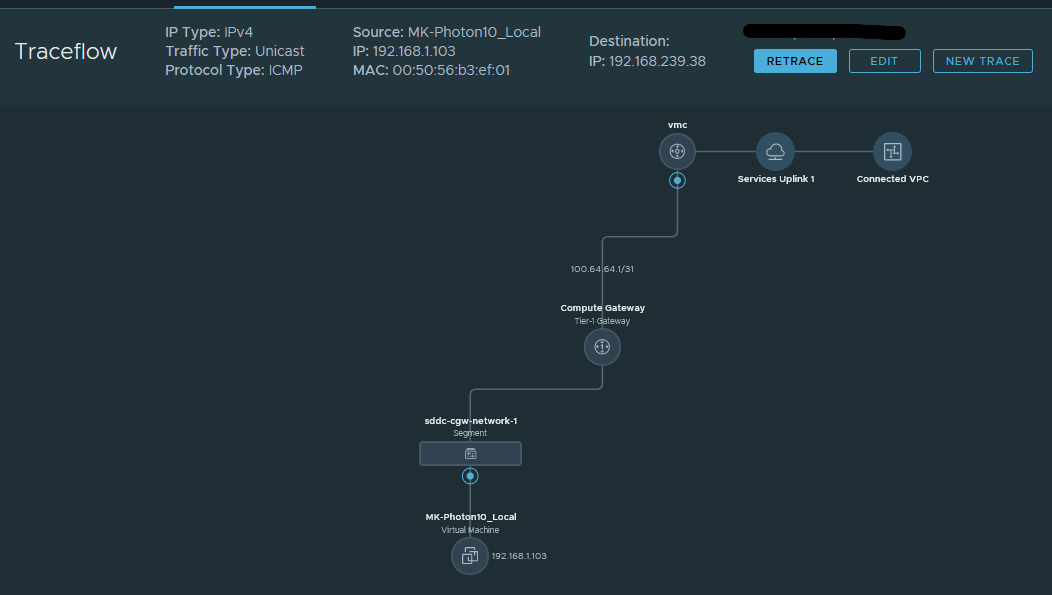 Once an SDDC is connected to a VPC, there is currently no user-serviceable method to change that VPC or subnet. However, you can contact support to request VMC engineering  assistance with reconnecting the SDDC to a new AWS account/VPC/subnet.